The Mystery and Magic of the
Mitchell-Hedges Crystal Skull

Move over Indiana Jones and the Kingdom of the Crystal Skull and make room for the real-life legend of The Mitchell-Hedges Crystal Skull, a storied tale as weird as it is riveting. 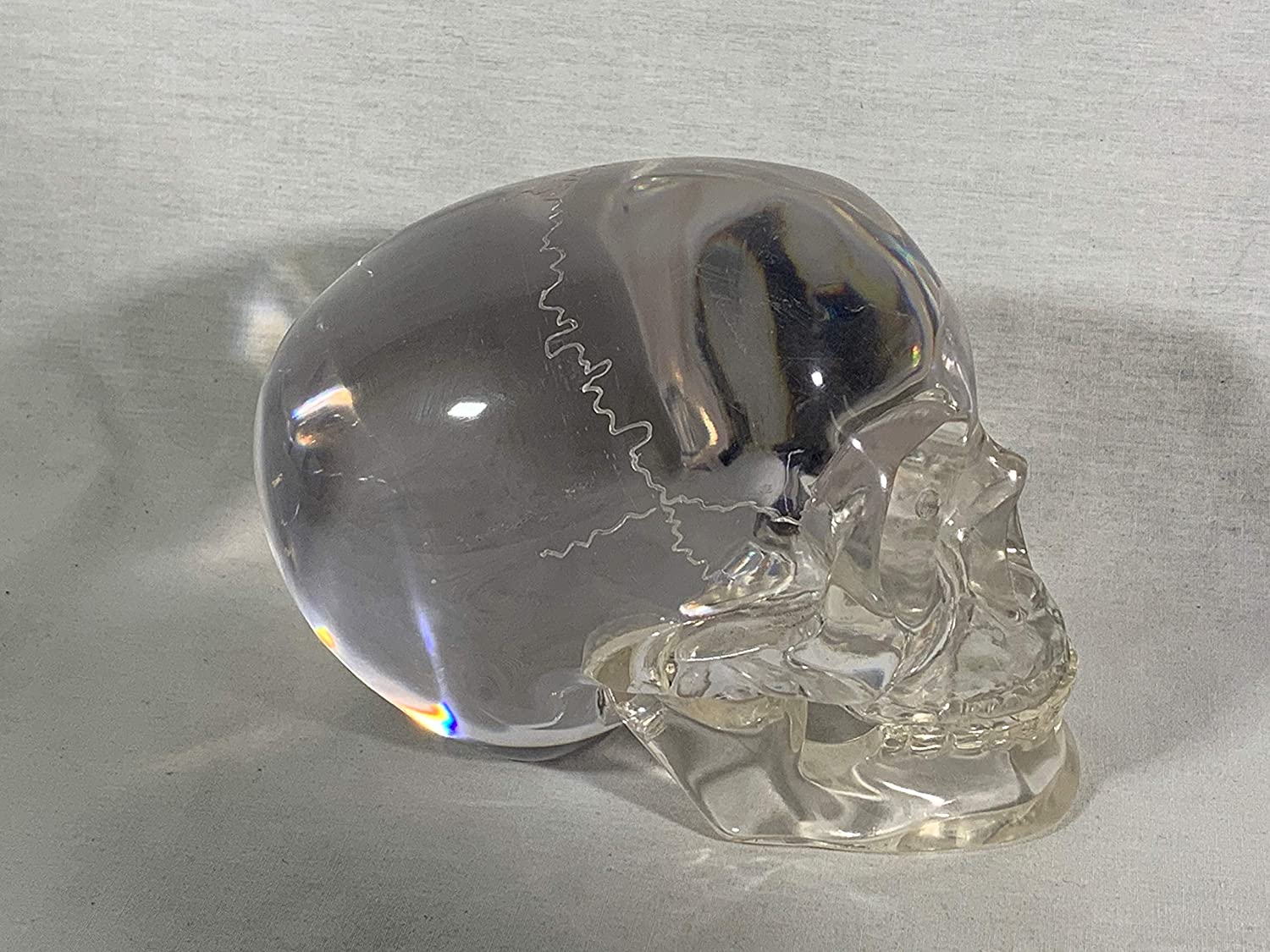 The Lost Maya City of Lubaantun

Rising from the foothills of the Maya Mountains in southern Belize, the ancient Mayan city of Lubaantun casts its mystery and magic onto the coastal plains of Toledo. On a crystal clear day, the Caribbean Sea can be sighted some 20 miles to the east. Legend has it that, in 1924, an intrepid British archaeologist scouting for Atlantis happed upon a Crystal Skull in the Mayan ruins in Lubaantun. His story of the discovery and power of the Crystal Skull is as mind-boggling as it is mythical.

As the story goes the archaeological party, headed by Frederick Albert Mitchell-Hedges, elected to torch a 33-hectare area around the settlement to facilitate the dig. Rising from the ashes when the smoke cleared, was the staggering sight of an ancient site, the Lost Maya City of Lubaantun. There stood Lubaantun’s city walls, stone pyramid, and enormous arena capable of housing thousands of spectators.

Occupied from 730 A.D. to 890 A.D., Lubaantun was one of the last great Mayan holdouts before the collapse of a far-flung empire once teeming with 20 million people. In 160 years, the Maya of Lubaantun built their realm into a flourishing commercial and ceremonial hub, casting their reach westward into Guatemala for jade and obsidian and eastward to the shores of the Caribbean for shells and sea creatures. Their domain extended over an estimated area of 625 square miles. 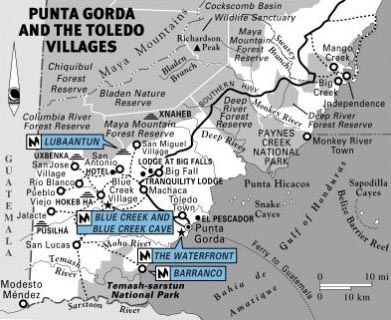 Lubaantun, known as “the place of fallen stones” was built in the dry masonry style of architecture specific to Southern Belize. Some consider Lubaantun a minor Mayan settlement. However, the beauty and majesty of this Late Classic site; with its rounded corners and curves, endemic to this location only, cannot be discounted. 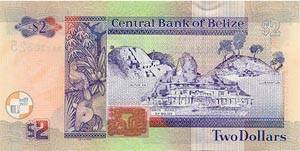 The Skull of Doom

Skulls litter the corridors of Mayan history. In the Mayan world, the skull was sacred. Enshrined in their rites and architecture, all sacred Mayan centres had a “Place of the Skull”. Used in esoteric rituals by Mayan high priests, crystal skulls have coursed through history exerting power over skeptic and believer alike. It was Mitchell-Hedges’ belief that “if a Mayan priest held the skull, while killing someone in his thoughts, the person would die”. Throughout the years, he did refer to it as the “Skull of Doom” which could have been based in facts known by Mitchell-Hedges or pure marketing hype concocted by a flamboyant adventurer.

In all the murky history related to the Crystal Skull, one thing is transparent. The Skull of Doom has proven to be anything but that for Steven Spielberg, director of the Indiana Jones’ movies; box office receipts for the May 24, 2008 opening weekend of Indiana Jones and the Kingdom of the Crystal Skull topped $126 million!

The Mitchell-Hedges Crystal Skull is carved from a unique type of clear quartz crystal; both cranium and mandible (allegedly discovered separately) appear to be derived from the same solid block. Weighing in at 11.7 pounds (versus that of an adult human skull at 2.2 pounds), the Crystal Skull is an anatomically accurate replica of a human skull, albeit a small one. Its small size of about five inches high, five inches wide, and seven inches long have prompted some to refer to the Mitchell-Hedges Crystal Skull as a “She”.

In 1970, Anna Mitchell-Hedges submitted the Crystal Skull to Hewlett Packard Laboratories for extensive scrutiny and analysis. The results of their testing were as confounding and astonishing as could be imagined. Researchers discovered that the skull had been carved against the grain (the natural axis of the crystal), an anomaly which would have resulted in the shattering of the Crystal Skull even with the use of modern, and high-tech cutting devices.

Further flummoxing the HP researchers was the fact that they couldn’t detect any microscopic scratches on the crystal which would have earmarked the Crystal Skull as having been carved with metal tools. Frank Dorland, an art restoration expert who oversaw the testing, hypothesized that the Crystal Skull was initially chiseled with diamonds and then further sculpted with a solution of silicon and water. However, this exacting process would have taken 300 years to complete! Thus spawned the theory that the origin of the Crystal Skull was extra-terrestrial or from an ancient, technologically advanced civilization such as Atlantis.

No wonder the author, Arthur C. Clarke, called the Crystal Skull “the weirdest gem in the world”!

Hollywood Can’t Hold a Candle to this Script

Without a doubt, the real-life version of the Crystal Skull easily rivals the big-screen version.

However, this story begins long before Anna’s death in 2007 and long before 1967 when Anna Mitchell-Hedges held court as Keeper of the Crystal Skull in a motel on Victoria Street in Kitchener, Ontario, Canada.

Did the story begin in 1924 when the 17-year old Anna supposedly accompanied her father on an expedition to the lost Maya city of Lubaantun, British Honduras (now Belize)? There, she contended, they discovered the Crystal Skull under an altar in the excavated ruins. The story unfolds that only part of the Crystal Skull was unearthed that day, with the detachable “jaw bone” discovered in the same room in a subsequent excursion three months later (rather implausible). However, no photographs of the Crystal Skull or Anna emerged from those taken during this excursion. 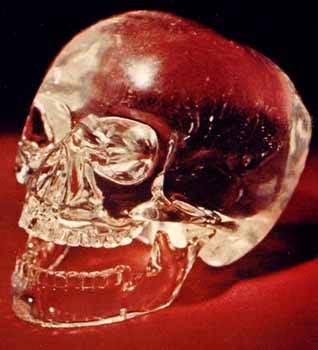 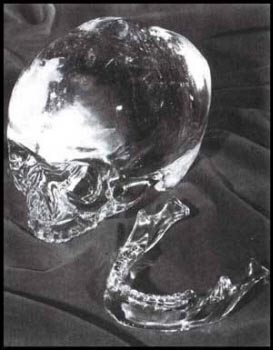 The hinged jaw of the Mitchell-Hedges Crystal Skull

Perhaps, the origins of the Mitchell-Hedges Crystal Skull can be tracked back to a sailor of fortune’s wife who sold it to Tiffany’s, the New York jeweler, in 1929?

Or does the story begin in 1943 when Mitchell-Hedges evidently bought the Crystal Skull at a Sotheby’s auction in London? Records have been unearthed that show that the British Museum bid against Mitchell-Hedges for the crystal relic to add the Crystal Skull to their collection at the Museum of Mankind. This note was written by a British Museum staff member: “Bid at Sotheby’s sale, lot 54, 15 x 43 up to 340 pounds (Fairfax). Brought in by Burney. Sold subsequently by Mr. Burney at auction at Sotheby’s in London, in 1943 to Mr. Mitchell-Hedges for 400 pounds”.

Or does the tale hearken back 3,600 years, as F.A. “Mike” Mitchell-Hedges wrote in his 1954 autobiography “Danger My Ally”? “The skull” he wrote “is at least 3,600 years old and…has been described as the embodiment of all evil. I do not wish to try and explain this phenomenon”.

Furthering the skullduggery surrounding the Crystal Skull, F.A. Mitchell-Hedges wrote “How it came into my possession I have reason for not revealing.” One thing that is crystal clear is that Mitchell-Hedges liked to spin tales – tall or not – which included accounts of his gambling with J.P. Morgan, rooming with Leon Trotsky and fighting with Pancho Villa!

Born in 1882, Mitchell-Hedges left Britain in 1899 and headed to America. A card shark, he underwrote his travels with money earned at the card tables. In his travels to Mexico, he was captured by the mustachioed, charismatic folk hero, Pancho Villa; the bandito-turned-revolutionary, who roamed the sierras as Mexico’s Robin Hood for more than two decades. Sometime, after he was taken prisoner, the swashbuckling British adventurer and swaggering Mexican revolutionary became good friends. Even Indiana Jones would have been proud.

An intrepid trailblazer with Indiana Jones’ chutzpah, Mitchell-Hedges left Mexico for Honduras and Jamaica. His explorations on land and discoveries underwater led him to believe that an ancient civilization had once graced the area; he identified this venerable culture as Atlantis. His 1924 expedition to British Honduras, now Belize, was in search of Atlantis.

Only the Crystal Skull knows for sure.

Next: An interview with Ronald Fleming, a Kitchener native, who met Anna Mitchell-Hedges and viewed the Crystal Skull!

Back to the home page of Belize Property Center

It's very safe and easy for foreigners, especially United States of America and Canada residents, to buy real estate in Belize. Read More about owning a property in Belize